All articles tagged with "Sweaty Socks"

Princess Serena wanted to show her slave something but he acted like he did not want to do what she wanted to show him. She was pissed as it was not optional for him to tell her what to do or what not to do. She forced him to lie down and lick her feet as well as her dirty socks and he did. What saved him is that he did it the way she wanted.

Mistress Morgan takes advantage of guy with crush on her

Mistress Morgan knew this guy had a thing for her. He always tried to talk to her but she did not have time for him. Today she was bored and she thought of humiliating him for fun. She called him to her house and he went running. She made him lick her socks and her sweaty feet and he had no option but to do it. But she lied to him that she had a fetish for it.

Mistress Clarissa humiliates girl for following her around

Mistress Clarissa does not like this girl. She is infatuated with her and likes to follow her around. She decided to put an end to it so she made her lick her feet as well as her socks. She wanted the dirty and smelly socks licked and the guy had no choice but to lick them as she had been ordered in order for her to learn to leave the mistress alone.

This mistress had given her slave an assignment but he had not finished it. She was pissed with him and she had to teach him a lesson he would not forget in a hurry. She planned to use her socks to punish him. She had made sure they were smelly intentionally. She also planned to use her bare feet because they were sweaty as well as smelly just like the socks.

Mistresses torture guy for disturbing them

These mistresses were spending their time productively preparing for their upcoming exams but this guy came to disturb them. They were pissed and had to show him what they do to guys who are a nuisance. The mistresses used their socks to humiliate him. They made him lick their socks and smell them not caring what it meant to them. The mistresses went on with their studies as the guy was smelling their socks. 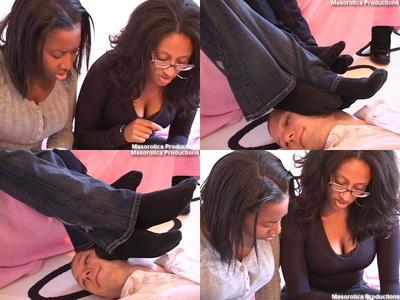 Mistress Ava and mistress Jessica had a lot to teach this loser. He was to be taught a lesson and he was taught a cruel one. He was nearly choked as he was forced to lick the dirty and sweaty socks that belonged to the mistresses. He had to lick them and make sure they were clean before the mistresses even thought about letting him go. They laughed at him as he did what they told him.

Mistress Jenna had a new slave so she made sure that her feet were smelly and once she confirmed they were as smelly as she wanted, she used them to humiliate her slave. She wanted to find out how obedient her slave was so she made him smell her socks and lick them before sniffing her sneakers. She even showed him how to do it and he did it in a way that impressed her.

Mistress Donella humiliates slave while chatting with him

Mistress Donella is a weird mistress. She was conversing with this loser while humiliating him. She did not find it a bit weird. She was chatting with him and smiling while he did his best to lick her shoes and smell her socks like she had ordered him. All she wanted was someone to talk to her while her punishment was being carried out and that person was the slave.

Mistress Cassandra was tired of living with a loser. She wanted to tell him to leave but she had one last thing to try. She had tried to encourage him but it clearly did not work. Now she sought to humiliate him and let him know everyday he did not do any productive thing he would be treated like a loser and humiliated. She forced him to lick and chew her smelly socks a couple of times and her message sunk into his thick head.

This mistress was on her way back from work when she noticed something on the driveway. It was sock and it was smelling. She did not know who it belonged to but she took it inside and used it to humiliate her slave. She did not want any such thing near her house and her slave had not checked to make sure her house was as clean as it could be.